As a coach, treat corner kicks seriously. It’s one of the youth soccer drills that can generate great dividends for your team. 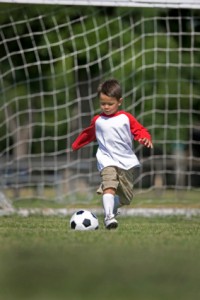 The use of corner-kicks should play an important part in every team’s attacking plans. Corners have become such a crucial way of creating scoring chances that coaches explore many methods for taking the kicks. If you’ve decided that corners are going to play a big role in your team’s scoring chances, crossing the ball is the skill that should be practiced.

To take accurate corners you’ll have to work on basic kicking techniques to get the necessary power. Have your players hit the ball firmly keeping the ankle firm, keeping the eyes on the ball at the moment of contact. Most of the time players should be trying to loft the ball. This can be achieved by placing the non-kicking foot slightly behind the ball rather than alongside it, and by leaning the body backwards as the kicking foot nears the ball. Contact should be made with the instep. Spend time having your players get power and loft into their kicks.

Although short corners run the added risk that the ball might be lost even before the cross gets into the goalmouth, they have the advantage of enticing defenders away from the goal area and thus give attackers more space in which to work. With this in mind, start planning your corner tactics with a short corner move. For youth players these work well if they are too young to have the strength to kick a ball high in the air from a corner position.

It is important to work on the way you position players in the penalty area. The bigger men are of most use on the far post whereas the smaller and often quicker players can be used for near post running. It is a good idea to have 1 tall player on the goal-line looking for the cross which is close to the goal.

With a tall player to aim for, corners can be played in different ways. One is the ball power- swerved inside the near post. This obviously has to be very accurate and will require a lot of practice, but with a tall player on the line who could make contact with it the practice is well worth the effort. The second type of long kick can be played to players taking up formation just inside the opposite corner of the penalty area looking for an outswinging ball just beyond the reach of the keeper which might tempt him to leave his line. This concentration of players can move simultaneously on to the ball, in the hope that by sheer weight of numbers one player might be able to head forcibly towards goal.

These tactics must be built slowly. Include them step by step-move by move until all the players know what they are doing. When you are happy with your progress, play games in which every time the defending side puts the ball out of play in their own half, a corner is awarded. If you have limited time for practices, you can’t go wrong concentrating on good corner kicking technique. Winning teams are often great corner-kicking teams.

View all posts by Rob Smith →
The Skillset of Turning Against Defenders
New Free Report: “30 Ways to Motivate Players and Keep Them Working Hard”

One Response to Corner Kicking Importance and Tactics