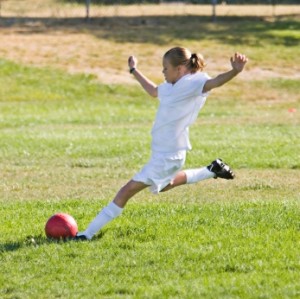 Often, leagues for 7-11 year olds will play on a smaller field, typically around 70 yards by 45 yards or smaller. The goals are typically 7’ x 21’, and there are only eight players on the field, instead of 11. The fewer players allow for more involvement and touches by the young players. Many youth coaches have only played 11 V 11 and struggle to determine what is the best formation to use at this age group with only seven position players and the keeper on the field. This article looks at one formation, the 3-3-1, and examines how the skills that you need to teach at each position.

Building From the Back to the Front – 3 Defenders

At the younger ages, keeping the ball from being shot on net is critical component to a team’s success. Most teams will rotate keepers from positional players and don’t spend much time training their keepers to come out and cut down angles on shots. A good shot usually finds the back of the net, so in building your 3-3-1 you start by teaching good defensive fundamentals to all players. As you are training all the players, be on the lookout for players who have some advanced defensive and ball control skills. Here are the fundamental skills and principles you should teach your defensive unit:

3. Playing a Ball In the Box – as a coach, you will soon see what players are suited to act quickly and take the ball out of a threatening situation. That is a critical skill for the defenders. You need defenders who get a sense of urgency and increase their intensity when the ball is in the box.

c. Field Awareness – Finally, you need defenders who have good awareness of where the threats are coming from. A smart, highly skilled center fullback is critical in this defense. This position is the leader of the defense and needs to learn to move the other defenders into the proper position, is tough to beat off the dribble, takes command during dead ball situations, and battles for loose balls in the box are the skills and mentality you want to develop in the center fullback position.

The 3-3-1 formation employs three midfielders. With only eight players on the field, these three positions are critical because they play offense and then quickly transition to defense. Here are some guiding principles and skills sets of the outside midfielders and the center midfielder.

a. Field Awareness – the center midfield position needs to be manned by a player who has great awareness of what is going on around him. Offensively, the center mid needs to be aware of who is making runs, what give-and-go opportunities are presenting themselves, and when to not force play on one side but instead change fields. Defensively, the center midfield needs to control a large portion of the middle of the field. They have to understand who the offensive threats are and mark or make sure someone is marking that player.

b. Passing Ability – The center midfield is like the point guard in basketball. They will possess the ball more than any other player and need to be able to take a controlling dribble, keep their head up, and make the appropriate pass to move the offense down field.

c. Transition – You need to have a center midfielder who can run and run and run some more. As soon as possession is lost, they need to immediately drop and play defense. Coach Anson Dorrance once scouted Mia Hamm in high school and knew she was going to be a great player before she even touched the ball in the game. Within the first 15 seconds her team transitioned from offense to defense and she quickly sprinted to a defensive position. She didn’t take two or three more steps away from the play and put her head down in disappointment because her team lost the ball. She was EAGER to transition to defense. That is the mentality you want to develop in this position.

d. Stamina – This position involves the most running, one-on-one battles, and physical play of all the positions. You need to develop conditioning in all your players but you are looking for a player who can really put forth great effort on the field over the entire game.

e. Aggressiveness – The middle of the field is where most 50/50 balls will take place. You need to develop a center midfielder who wants to win those battles. Some players will be motivated by scoring a goal, this position needs to be motivated by winning a ball. They need to want to control the ball in the air and are not afraid of physical play.

a. Speed – When an offensive push is being made, the success of the 3-3-1 formation is based on getting the ball out of the middle and to the outside. That is where the most space will be on the field. This position needs players who can cover lots of ground quickly. As you are developing players, the outside midfielders may not quite have the foot skills of your defenders, but they need to have the speed because they are forced to cover much more space than the defenders.

b. Shooting Ability – In this formation your outside midfielders play the role of outside forwards in 11 V 11. Therefore, they will be required to take some shots on the move. Work on developing their striking ability, since that is critical for both a shot and a cross.

c. Crossing Ability – not only does the outside midfielder need to have the foot and ability to make a cross, they need to know if they should take the ball to the end line and then cross it, or at the corner of the box to cut towards the goal and look for a shot or slide a pass to the center forward. They will also typically be taking your corner kicks so really work with your outside forwards on getting the ball off the ground and deep into the middle of the goal area as possible. Ideally, you will want a left footed player on the left side, but if you don’t have a player whose left is their strong foot, really work to develop the weak foot of your outside midfielder.

d. Beating the Defender off the Dribble – Teach your players at this position one or two good offensive moves that will beat a defender. Often, a give and go will put the outside midfield in a position where the need to beat one more defender to become a scoring threat. If they have even one move that they can work on that will help them beat that defender, they will be much more successful.

e. Transitioning to Defense – It is critical that when transition from offensive to defense occurs, the outside midfielders are sprinting back to defend. Therefore, they need to be well-conditioned and recognize what to do on a chance of possession.

The center forward is like the tip of the spear in this offense. The play is built from the back, the midfields work the ball up field, and then seek to get the ball into scoring position, often by involving the center forward. Here are some keys to this position:

a. Controlling the Ball – It takes a lot of work to move a ball from the defensive end into a scoring position. The center forward needs to be very strong on the ball and not give up possession easily to maximize all the team’s work to get the ball forward. Often, there will be two or three defenders collapsing on them so they need to be able to shield the ball, receive physical play, and still make a strong offensive move.

b. Striking Ability – In the 3-3-1, often the center forward is getting the ball near the edge of the box. The ability to make one controlling dribble to separate from the defenders and getting off a solid, quick strike on goal separates a good center forward from an average one. Again, at this age level, a strong shot on goal, especially in the corners, often results in a goal.

d. Aggressiveness in the Box/Scoring Mentality – There are some players that intuitively find ways to put the ball in the back of the net. Some other highly skilled players struggle finishing a shot in the box. Look for a player who seems to become more focused and aggressive in the box and finishes shots well. Just as defenders need to heighten their focus and energy when the opponent has possession in the box, you need a center forward that has a sense of urgency in the box. They demonstrate a burst of energy and speed to cut the defender off and get a foot on a lot of balls.

A final thought is to teach the entire team how to shift and maintain their positions and spacing regardless of where the ball is on the field. If the ball is on the far right side of the field, the left fullback and midfielder will want to be nearly in the middle of the field. As the ball goes to the middle, the entire team shifts back to their starting position, and when it goes to the left side, the right midfield and fullback pinch in to the middle.

A great drill to teach shifting is simply to have eight positions start in the beginning positions in a 3-3-1 formation. You can use just half the field to set your team. You can put two players at a position, but they need to act as one player and move together. Set up four pennies on each side of the field at the far side of the box extended.

Have the keeper (or the coach if the keeper can’t punt to the defenders) punt the ball to various places on the field. Players need to control the punt and get it on the outside of the pennies to a teammate. The coach should emphasize using the space on outside of the field, which is not as heavily defended.

When the ball gets to the outside, make sure that the opposite side players pinch into the middle. As the ball moves up the field, make sure spacing is maintained, the defense moves up, and the center midfield is checking to the ball and not getting to close to the center forward. The team then tries to cross or get the ball in a scoring position and a player takes a shot on the keeper. If it saved the keeper punts the ball back in play and the team needs to transition back to their original position.

You can add two to four defenders as well, to make the drill simulate game like conditions.

Tactical Flexibility with the 4-2-3-1 Soccer System

35 Responses to What Is the Best Formation in 8 V 8 Soccer?