Saturday arrives. It’s the final game of the season for your 8-11 year old girls team. You don’t know if anyone else is keeping track but if you win this game, your team will have the best record in the recreation league!

You have a roster of 18 but rarely do the girls all show up so substitution hasn’t been an issue all season. At twenty minutes prior to the game, you have your normal 13, a manageable number. Then, two more girls arrive. You start getting nervous. At least you don’t have the three youngest and worst players who rarely show up to games or practices. Just before kick-off, your heart sinks. All three show up together with parents in tow. You think….

“How do I handle substitutions with 18 players and a championship on the line?” 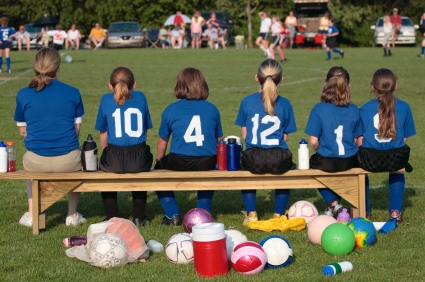 Here are some ideas on how to handle this situation and give you some principles and guidelines to ease the pressure of making substitution decisions on the fly.

1. Winning/Losing Mentality Vs. Player Development Mentality – A first step to making substitution decisions is having the right perspective on your role as a youth coach. Often a coach’s last playing experience was at much higher level. If you played in high school or college, winning was an important emphasis. But as a coach of a young recreational team, you need to have the right perspective on wins vs. helping all players develop and grow in their abilities as a soccer player.

In this example, you are dealing with young children with a diverse age group in a recreation league. A first step is to have the development of each child as your primary focus, not wins and losses. If helping a child improve their soccer skills excites and motivates you, you will not feel the pressure of winning a match or the championship. Although subbing so many players does pose issues, at least you won’t have to deal with the disappointment you feel if a less skilled player shows up to your game. Your role is not to produce a win; it’s to provide an opportunity for growth for your players.

2. Communication with Players and Parents – Another step that can be taken at the beginning of the season is to think through situations like this and come up with some policies that can be communicated to all players and parents. You need to make the policies be appropriate for your level of play and type of league.

In this scenario, perhaps a rule would be if you don’t attend one of your two practices the week of the game, you sit the first half. Or, if you arrive later than 15 minutes prior to kick-off you don’t start. On the other hand, you could have a policy that whoever shows up gets roughly even playing time. Perhaps the older girls play a little longer than the younger ones. Whatever you decide, if you communicate the guidelines right up front to players and parents, you won’t feel the pressure of making game time decisions in situations like this.

3. Finding A Good Assistant To Track Time on the Field for Each Player – As the head coach, you need to develop the policies and know in advance how you are going to handle various substitutions scenarios. In a game situation, if you are coaching alone, you are trying to keep track of so many things it is easy to lose track of who has subbed in and how much time players are playing. One of the ways to help is at the beginning of the season find a parent you get along with, or a spouse or older child, who could assist you in keeping track of the minutes each player has played.

Provide a stop watch and a white board with all the players’ names to your assistant whose sole role is to track when they go in and out. Instruct them to write a total of minutes played by each name. They would erase the total and add new minutes when you sub them. With a quick glance you can get a feel of who has played significant minutes, and those who have not played as much. Parents will see that you are aware of the time their child is playing and you can make fairer subbing decisions by knowing the time each player has been on the field.

4. You Are Blowing Them Out! – The “best case” scenario happens. You have a couple of excellent, and often older, players who repeatedly score early in the match. In a recreation soccer environment, you will want to be careful about letting just one or two players dominate the play. Not only will the other parents and coach be upset, you will have 16 parents on your team frustrated. This is a good opportunity to rotate some of the less experienced players into the game and either sit the dominate players or put them in goal or on defense.

5. Embrace and Learn from Every Difficult Situation – To become a better coach you need to experience a variety of tough situations. Often, you will make decisions that upon reflection, you will think of better ways to handle them. But don’t beat yourself up by putting too much pressure on making the perfect decision at all times. When parents complain, which they will no matter what decision you make, if you have the mentality that you embrace learning opportunities you will more likely welcome their input. Just communicate with them why you made the decisions you did, and if they have some valid points, let them know you have learned from the situation and appreciate their input. Try not to be too defensive because you never know what is going on in the life of one of your players and sometimes, you are just getting the brunt of a difficult time in a parent’s life.