By Rob Smith on November 4, 2010 in coaching soccer

One of the most thrilling sights in soccer is that of a player sprinting towards the net with the ball under total control, 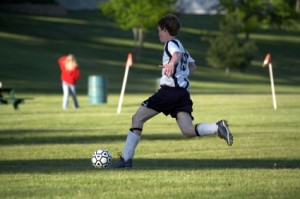 twisting by a string of opponents and unleashing an unstoppable shot at goal. You’ll notice these players always know where they’re going and they have the ability to work with the ball effortlessly. They’ve developed the art of manipulating the ball while moving at high speed.

Great soccer players always seem to never be without a ball. They simply like to juggle and entertain themselves and it’s as if the ball becomes a part of them. This helps cultivate feel and helps a player to learn to lift his head from time to time so that he can look around instead of staring at his feet.

Not all players will want to have a ball with them at all times and that’s fine. Simply instruct your players to practice with both feet, using both the inside and outside as well as the full instep, push­ing the ball directly in front of them. Begin by walking with it, then go on to jogging, then to running fast. Tell them that the position of your upper body is important as it must be inclining slightly forward. It’s much harder to run with the ball than without it so in a game only run with the ball when you have something in mind and you think something positive can be accomplished. There are a lot of soccer drills that can help young players of all ages to develop a feel for the ball.

When dribbling you must concentrate on keeping the ball close to you and away from opponents. Keep your eyes on the ball when you’re making contact, but in between touches look up for a split second to see what’s going on around you. Not looking up is common among many young players. Remember not to hold your ankle too stiff on contact or your touch will be too firm and you will push the ball too far in front of you. If a pee-wee or kindergarten-aged player can understand the importance of moving the ball down the field without looking at his feet then he’s well on his way to soccer greatness!

Having worked at keeping the ball under con­trol without breaking the rhythm and swing of your stride, work with a dozen teammates in the center circle. Everyone has a ball, and the idea is to move about without running into each other or losing your ball. Try to develop a change of pace. You can play a game where the idea is to kick everybody else’s ball out of the circle while keeping control of your own. After a specified period, the player who has lost his ball the least number of times is the winner. The center-circle is an ideal area to use for all kinds of dribbling activities.

Your players should now be ready for the real thing and that is to take on an opponent and get a shot in at goal. With one of your players, demonstrate the following. Stand on the halfway line while your partner stands just outside the penalty area with a ball. He plays the ball to you, then acts as a defender. You should have enough confidence to move on to the ball, control it in your stride and go at speed at the defender just at the right moment. Try changing direction with a sudden burst of speed past him and hit the ball hard at goal. Retrieve the ball and switch roles.

Move on to playing a six-a-side game in which each player must take on an opponent before passing or else his side forfeits possession. One final practice is to play a game where no passing is allowed, and you must dribble the ball until you lose it. These games will bring out the qualities you need which are balance, control, and accelera­tion. Then, when in a game and you have a definite purpose in mind, you’ll be able to run full tilt at a defense and set up the chance for a great goal.

One Response to Learn to Carry the Ball and Attack Defenders