The ability to run fast is important for any player. Starting, stopping, turning, changing direction, jumping and 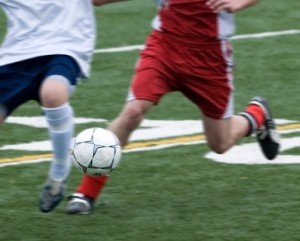 running are all actions that must be performed with as much speed as possible.

Many coaches believe that a child’s natural speed can’t be improved. This is to some extent true, but by putting effort into good speed-training drills the strengthening of the muscles and joints may be improved and the player will get faster. Most U-14 and younger players are not fully physically developed so they still have a lot of time to build strength and speed.

It’s not recommended for young players to spend long periods of time on aerobic and strength training that doesn’t involve a ball. The key is to introduce them to a few fun drills and they’ll begin to understand in time that working on and caring for their bodies will make them better players.

If you’re going to do it at all, speed training should be initiated at the start of your practice session after a good warm-up period. It’s not a good idea to work on speed development after a strenuous training session. The body must be thoroughly prepared and very willing for these kinds of activities and after a long practice kids are mentally and physically tired.

To get started, here are a few fun drills that target speed training:

1) The first few yards in soccer are important, so an explosive start can often give the edge on an opponent. Here’s something to try and this can be turned into something fun. It’s probably best to demonstrate this to your players. Work from the goal-line to the edge of the penalty area. Sprint as fast as you can across this area to the line, then come to a stop gradually over another 15 yards before walking back to the goal-line. Work from different starting positions, lying on your back, your front, legs in the air, sitting, squatting, and any position that requires quick body movements before getting under way. To condition your body for stopping and starting, turn sharply on the penalty area line and sprint back to the goal-line. If you have a lot of players you can have a competition to see who is the first one back in the original starting position.

2) Shuttle sprints for four to eight players will help improve starting and turning. These players should stand in two groups 15 yards apart. One player starts by sprinting across to the other group and releasing a player by touching him, as in a relay, but immediately after he has touched him he sprints back after him, and returns to his original group waiting to be released and chased by a member from the other group. This is a continuous practice which, because of its physical demands, can’t be sus­tained for a long period.

3) In a small group of players, pair off and stand or sit them so they are about one yard from a partner and so that the group is in two teams forming two straight lines. Each team is given a name or color, such as reds and blues, etc. The idea is to call the name or color and for each member of that team to sprint to a line about 20 yards away without being touched by his partner. Again, if a player gets caught he must give the other player a lift back!

These are just a few of the exercises that one can work at to develop speed of thought and action. Talk and experiment to find others that will help you build a variation of exercises to keep things interesting. Remember to use speed training as a “spice” in your drill-work rather than the main course! Make sure your kids are having fun at all times!