Goals are scored from corner-kicks mainly because a defender failed to track an attacker coming in late, failed to time a jump with him, or was late to cover the deflected ball which is knocked down by one attacker for another to finish off. Practice is important so a team can collectively cope with these problems. Varying the types of corner-kicks in practice will be very helpful. Practicing corners can end up being very aggressive soccer drills. Players of any age can benefit and working with corners can help them learn positioning and defense in other parts of their game as well. 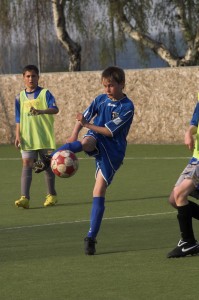 There are a few basic defensive principles which include single covering, double covering, man-for-man marking and concentration in defense. Attacking players in scoring positions must be tightly marked. The goal¬keeper should have adequate cover should he leave the net and because of the dangers from direct attempts on goal, he should have double cover in the form of a defender on each post.

At a corner, the goalkeeper, because he can handle the ball, is the key defender. He should position himself so that he can see what’s going on and must take notice of the kick being taken and the movement of opponents, especially those close to his goal. This is best done from the far post and just infield, which allows one defender to stand at the near post and another on the goal-line at the far post. The keeper should be prepared to come for all balls played into the goal area except those driven in to the near post. The defender on that post is often best situated to deal with balls that come into this area.

The goalie should also take command and issue instruc¬tions on every ball played into the penalty area. The fact that he is on the far post gives him a commanding position to deal with balls dropping in close to goal. He has only to move back a few yards to deal with the ball struck well to the far post and can move quickly forward for balls falling shorter. He should attempt to catch the ball if possible, or, if heavily pressured, he should punch into areas where the ball can’t be volleyed back by an opponent. The best areas are towards the touchlines, well away from the front of his goal. The keeper should call to let his defenders know he is leaving his line so that they can move out of his way and give him extra cover should he mishandle. This positioning may alter slightly if there is a direct danger from a ball swerved on the near post.

Some teams send up a big defender to stand on the goal-line in this region. The goalkeeper may feel more comfortable if he moves into a more central position to cope with the danger of very tall opposing players. This means that the defender on the far post may have to move out to meet balls played deep to the far post. The goalkeeper should have a lot of opportunities to practice these tactics so that an understanding can be made between him and his fellow defenders.

Defenders should mark man for man with a special emphasis on dangerous players. Opponents known to be good headers of a ball must be marked by the best men in the air on the defending team. This will have to be decided before the corner is taken so that each danger-man can be marked tightly in order to prevent him taking a free jump at the ball.

The marking by each defender should be goal side and slightly in front of the attacker he is marking. This position will help the defender to get in first on the short ball and also allow him to move back and challenge in the air for balls played slightly over him. This technique should be practiced often because of its importance in defending against cross balls. For many children of kindergarten age and younger, the positioning and tactics on corner kicks can be complicated. When teaching children of these ages try not to cram everything discussed in this article into one session. Try breaking it up and adding a new technique each practice session. Before long, your players will be able to defend corners with ease.