In soccer, ball possession determines everything. A team must have possession of the ball in order to make plays. Typically the team that has the longest time of possession ends up being the winner. The length of these time periods and the number of passes that are strung together will depend not only on the quality of the passes but also on how well the player with the ball is supported. 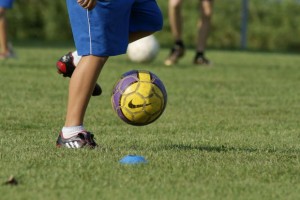 Although not a particularly aggressive soccer drill, the idea of retaining possession is important for middle school-and-under players to learn. Most pee wee or kindergarten age players believe they must do something with the ball as soon as they receive it and don’t take the time to consider their options. This could be due to nerves or other players yelling for a pass. In time, players will learn the importance of holding onto a ball until the time comes to make a good decision with it.

The men off the ball determine the shape of play. The player in possession, ideally, should have at least three players at any given moment to whom he can pass. A simple practice to get players used to the idea of supporting the man on the ball is to have three players interpassing the ball against one defender in an area about 12 yards square. As the ability of the players improves, the smaller the area can become.

Possession of the ball will depend on the players off the ball working to make themselves available for passes. This means positioning themselves at an angle so that there’s a clear pathway for the ball to travel without a chance of interception. They must also work to position themselves in such a way that they maintain as much space as possible in front of them. They should concentrate in passing the ball so that the player who receives the ball can control it very quickly and easily. Once the ball is passed, the two players off the ball must re-position themselves in order to support again.

As the team improves, introduce two more players into the routine. Six players are now involved. Pair up two pairs and play against one pair, or 4 against 2, and play in an area about 20 yards square. Again the two in the middle switch off when the ball is intercepted or goes out of play. A player should keep space in front of him when supporting the player with the ball so that he’ll have time to play the next pass when he receives it.

This type of small-sided practice is very important because the same principles are involved as in the real game, yet the players are involved many more times in a much shorter period. Possession, as mentioned, is a key to soccer. If you get into the habit of having your players practice these skills before progressing to a real game, these skills will serve the team well when they play eleven a side.

In an ideal match, the forwards are able to move the ball wherever they require. This can only be achieved if there are supporting players. Every player on the ball requires help.
If a player can’t play forward or receive the ball when facing his own goal, then he must have support from his teammates coming towards him.

The key to success is to learn to anticipate play when not actually in the play. Good players can look like bad players if they aren’t supported when in possession. Have patience and allow your young players to transition into a game in which they learn to hold the ball and you’ll see certain success.