If a player wants to take a ball away from an opponent, the way to do it is through good tackling. Great defensive skills 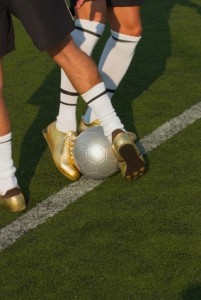 will help, but good positioning might be even more important. Good tacklers always adhere to certain fundamental rules –

2) They always give themselves a chance at intercepting the ball

3) They always limit the area in which their opponents can receive the ball.

It’s important to remember to mark close enough so that your player can tackle him as he receives the ball, but not so close that the opponent can lose your player by quickly moving into a dangerous position.

The most important single factor when it comes to the tactics of tackling is timing. The tackle should be made at the first chance and ideally just as the opponent is receiving the ball. At this time your opponent’s concentration will be focused on controlling the ball so a quick, unexpected tackle before he has full control will often be successful.

A different approach should be taken if your opponent already has complete control of the ball. It can be dangerous to rush in and attempt a tackle on a player who is prepared for it. He can simply avoid the tackle, leave your player stranded and pull his teammates out of position to deal with the situation. Rather, hold off and patiently follow and pressure him into making a mistake. Once the opportunity presents itself, a player can have confidence going in to make a determined tackle.

Pressuring an opponent should be done in an aggressive way. The attacker shouldn’t be allowed to dictate the situation and the area into which he’s going. The defender should try to keep him on the move, shepherd him away from his goal towards the touchline, and be ready to pounce on a mistake. The closer he’s forced to the touch­line, the less area he has to work in. Get him over the touchline and the ball is yours.

Let’s take a look at a few aggressive soccer drills that work on tackling. Tackling is not a good drill set for pee wee age players or players in that age range. Try using tackling drills on occasion to an older age player group, like those in the u16 or u14 range.

1) Cat-and-Mouse – this game can be practiced by two players. Player A should dribble towards player B and attempt to beat player B by going around him. Player B must concentrate on keeping close to him, letting him pass, and forcing him into an area that he wishes him to go. Once in a safe area, B can look for a good tackling opportunity.

2) Now move into an area about 20 yards square and play three against two. The side with the two players are the defenders. The three offensive players pass amongst each other, keeping the ball within the area and away from the two defenders. The object here is for the defenders to work together so that the ball is played into an area that gives them a chance of an interception or tackle. If one of the defenders attacks the player in possession and pressures him into playing the ball, the second defender can anticipate this action and close down the intended pass and tackle the receiving player as he attempts to gain control. This is not an easy game for defenders because the player in possession has two players he can pass the ball to. The idea is for the defender applying immediate pressure to approach in such a way that he not only makes the player in possession move in one direction, but also cuts out one of the other attackers.

Like most skills in soccer, tackling is an art that combines great instinct, positioning, and timing. Once mastered, it can serve as a valuable weapon in your players’ arsenal and serve your team well.