By Rob Smith on January 11, 2010 in coaching youth soccer

You have one practice before your games begin. You’ve got to make the best use of your time, resources, and players. Unless the players are 3-4 year olds, forget getting creative, focus on skill-building and teamwork. Indoor soccer is highly structured time-wise. You are scheduled for an hour and when that hour is done, you’re done, unless you’ve paid for extra practices. 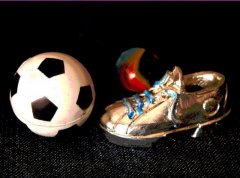 Make sure every parent understands that the players need to be properly attired.

Before ever setting foot on the practice field, make sure every parent understands that the players need to be properly attired or they will not practice. This means shin guards and a properly identified soccer ball per player. If there are two children in a family playing, then each brings his or her own gear.

Instead of three or four “gamey” drills that focus on more fun than skill, let the players spend the first five minutes or so kicking around their soccer balls so that they get the feel of the arena and get to know the players that they will be playing with; chances are, they’ve never played as a team before.

Then have them practice on skill sets as a team. Keep the practice moving at a brisk pace, so that the players get a feel of the pace of the game. Focus on a single drill that combines skills: one child kicks the ball from center, while one child guards the baseline and one child goalies, switch off quickly as the kicker gets the kick past the defenseman. This should be the primary drill in that first 30 minutes.

The second half hour should focus on small-sided games that allow the players to practice against each other, preferably on the full field if you are not sharing it with another team for practice.

Don’t forget to bring different colored pinnies for the goalies, some snacks and water. By the end of practice, the players will know what to expect from a game, and have practiced the major skills.

Coaching the Special Needs Child in U10 Soccer
Announcing our Free eBook “42 Soccer Drills & Practice Plans that Will Help You Develop a Winning Soccer Team!””