By Rob Smith on November 9, 2010 in coaching soccer

Stamina is one of the most important aspects of fitness. However skillful or quick a player may be, he won’t be able to 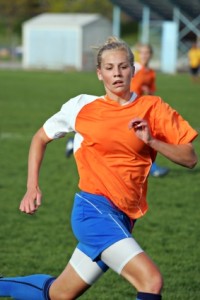 help his team during a hard game unless he has good endurance.

It’s best to avoid stamina-regimens for pee-wee, kindergarten, or even under 10 year-old-players as they don’t have a developed cardiovascular system for sustained exercise and they don’t have the attention span or interest either. All very young players should always or almost always be working with a ball. As players age you can begin to add stamina-building and exercise workouts into their routines.

When it comes to building endurance for soccer, there’s usually a step-wise way to do it. Soccer is not like cross-country in that there are more starts and stops rather than sustained running. Keep this in mind when planning training regimens. Follow basic rules for building stamina and your players will even amaze themselves with their fitness. Here are some ways to build stamina in your team.

1) Most teams concentrate on stamina building at the start of pre-season training. Almost any exercise is suitable when it’s performed over a prolonged period. Walking, running, games like handball or basketball are all ideal activities performed for about an hour or so. Slow distance work will help build a general stamina foundation.

2) From a general foundation you can graduate to quicker, interval work. You can begin by running 2,000 yards, broken down into ten 200-yard stints, resting for 3 minutes between each stint at first, then gradu­ally increasing the distance and cutting down the rest time until you are covering about 4,000 yards in 400 yard stints with a two-minute rest period. During the rest periods, you can practice various skills with a ball such as continuous heading or juggling.

3) Now that your team has good general stamina, another type of stamina will need work. This type of stamina is designed more specifically for soccer. Shuttle runs will condition your team for the sort of sprints they must make in games. From a starting line, objects are placed at intervals of 5 yards up to 25 yards. Players must sprint to each object in turn, returning to the starting line after each visit. 150 yards is covered on each stint. Start with six or eight stints, allowing 45 seconds for the running with a resting period of 45 seconds in between.

4) Other routines can involve a ball. A particularly effective one involves two players standing at markers, 25 yards apart. One dribbles the ball towards the other who runs in to meet him. As they come close, A passes to B and both continue on their way to the posts. There they turn and repeat the exercise. Do this eight times before resting.

Variation in training routines helps to keep away staleness, so introduce variety where pos­sible. Most kids dread running for the sake of running in soccer practice. If you can find a way to make it fun and competitive, you’ll get better results when it comes to building a strong cardiovascular foundation. If a player isn’t thinking about the work but rather focusing on winning a game he’ll have stronger stamina over time. Remember, you’re a coach and not a drill sergeant. It’s easy to fall into the trap of having players run for the sake of running. As long as you keep stamina building as a small part of your drill session you should be fine.