By Rob Smith on October 7, 2010 in coaching soccer

How many times, after a game and having been beaten badly you believe that ‘they seemed to have more players on the field than us’. The truth is that they probably had a better knowledge of the principles of the game when it came to 2 on 1 situations. 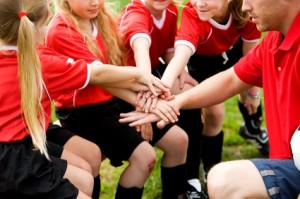 As a coach, if you can simply have them understand the idea of providing teammate support, then you can use that as a crutch to show them the value of running at defenders and passing the ball off.

When watching great professional teams, notice that the team with the ball often seems to have an extra player in the vicinity. This gives the player with the ball a choice. He can either take on his immediate opponent or pass to the spare man. Basically, it’s a ques­tion of creating a situation in which two players are directly attacking only one opponent.

Because there’s an even number of players on each side it becomes a game of cat-and-mouse. One of two things must happen. Either the player in possession makes a run at his immediate opponent or one of the players off the ball must lose his marking defender temporarily and move in to sup­port the player on the ball.

Here’s a basic practice soccer drill. Try playing two against one in a 10-yard square. This is a very demanding game physically because there’s lots of movement. The player off the ball must work very hard to make sure he is available to accept a pass. He must ensure that he doesn’t get caught for too long hidden behind the defender. This positional sense of moving in to support at the right time is essential.

This exercise should be the basis of all passing movements. If your players find the exercise too difficult, add another player and make it three against one. The same principles will apply. Once you get the idea you will make it more effective if the player with the ball can get a run at the defender before passing. This is called committing the defender.

There are many ways in which two players can beat one. No matter which method is used, the principle remains constant. The defender must be attacked by the two players and forced to commit himself. An experienced coach can quickly recognize when his players have an understanding of this concept.

If repeated 2-on-1’s in games fail, you’ll often find it necessary to go back to your original practices if the timing is off. You can break down the practice so that one player is being marked by an opponent and supported by a player with a ball. The object here is for one player to run quickly away from the supporter taking the marking player with him. He then applies the brakes hard and checks back towards his supporting player who must play the ball to him at precisely the time he needs it. If he delays then the marker will come tight, making it difficult for the player with the ball.

Players that are new to soccer or pee wee age might not grasp a concept like creating 2 on 1’s very quickly. It takes time for them to understand the “off-the-ball” intricacies of soccer and the proper timing. As a coach, if you can simply have them understand the idea of providing teammate support, then you can use that as a crutch to show them the value of running at defenders and passing the ball off. With a little practice time most players will begin to understand. If you can keep working to make pairs on the field you can’t go wrong.