The main emphasis for Wing Fake is to provide a setting for offensive wing players to practice change-of-pace runs and other feigning techniques necessary to get clear to make a cross. Defensive players practice maneuvering into proper position to cut off possible crosses or penetrating passes.

1. This drill consists of 2 players per group. The distance of the cones to the side lines are about 2-3 yards. Five or 6 cones can be used to mark off the appropriate areas. 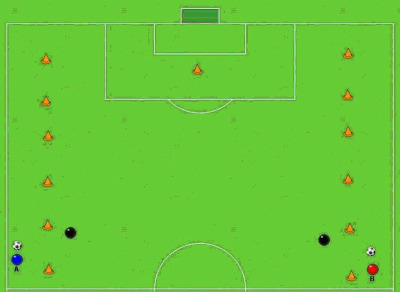 2. Players A and B dribble down the touchlines, A on left and B on the right. 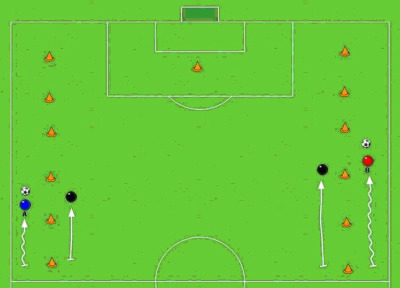 3. A and B must stay in the area marked off by the cones. Defensive players are not permitted inside the area where A and B are located.

4. A and B try to get clear of the defensive players in order to cross the ball to the flag located in the penalty area. A cross can occur not only after the last cone but anywhere during the run. 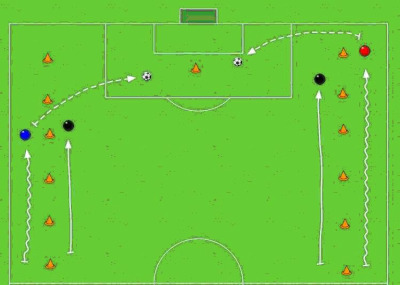 Wing Fake is a quick dribbling and passing drill. Players like the faking aspect of the drill and enjoy the challenge of trying to kick the ball into the cone located in the penalty area. During Wing Fake, instruct players to…

– (offensive) change speeds often to confuse the defender.
– (defensive) keep an eye on the offensive player’s stomach area and not the ball as an indication of where the player intends to go next.
– (offensive) frustrate the defender by using a lot of quick starts and stops.

Tip #1 – This drill can be tailored to help build both offensive
and/or defensive player skills.

Tip #2 – Reward any offensive player that is able to kick the ball into
the cone.

Tip #3 – Encourage the offensive player to use as many feigning skills
as possible.