This is a simple drill used when offensive players find themselves lined up one beside the other. The defensive player must decide whether to follow player A or player B. Whichever the case, one of the two offensive players will be free to take a shot on goal. This drill develops quick thinking among the offensive players and forces them to evaluate a situation and make a quick decision.

1. Three players per drill group are utilized – a defender and 2 offensive players.

2. Player B runs in front of and across the face of the defensive player, and is followed immediately by player A dribbling the ball.

3. Player A immediately follows Player B while dribbling the ball.

4. If the defensive player follows player B, player A dribbles in for a shot at the goal. 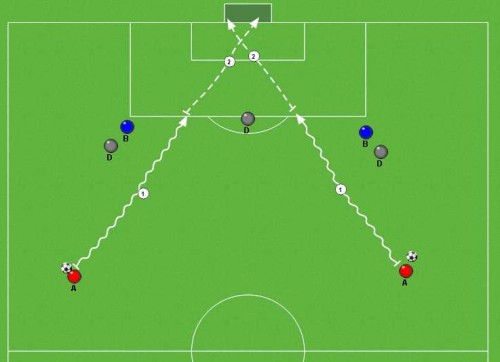 5. If the defensive player does not follow player B and hesitates, player A passes off to player B, who takes a shot on goal. 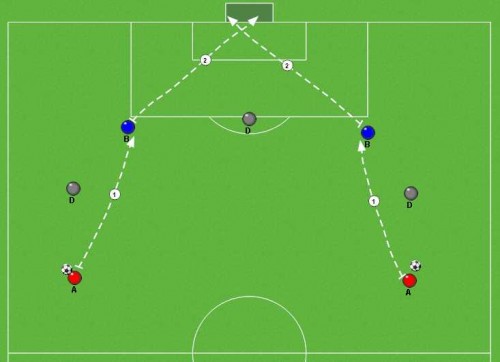 Running with Scissors is a simple, great offensive drill that forces players to think fast. They’ll have no choice but to make a quick decision under pressure which is what they’ll see in game situations. During this drill instruct players to…

– offensive: use your head! Soccer is as much a thinking game as it is a skill game. Always have in mind what you’d like to do with the ball.
– offensive: keep passes sharp and accurate so that player B can handle them.
– defensive: defenders also need to decide to follow the player with the ball or follow the player running towards the goal. This choice needs to be made quickly as often there will be many 2-on-1 situations to deal with.

Tip #1 – Award offensive teams that successfully and consistently
get good shots on goal.

Tip #2 – Defenders should never “throw their leg” when trying to remove
the ball from an offensive player.

Tip #3 – Encourage defenders to fake a running motion in order to
deceive the offensive players and try to steal the ball.

6 Responses to Running With Scissors