One-on-One Enticement builds dribbling and feinting skills. Also great for defenders, it teaches players not to reach for the ball unless they’re 100% sure of gaining possession.

1. Only 2 players per drill group are utilized. One player will serve as the offensive player and the other player is the defender.  (Note:  When running this drill, you should split your team into groups of 2 and have them all do the drill at the same time.  The last thing you want is players standing around during practice.)

2. Player B, the defender, stands several feet in front of the end line or the sideline. 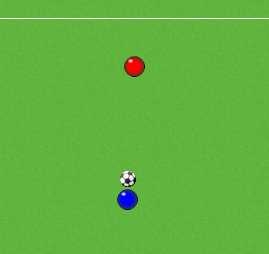 3. Player A faces the defensive player, B, with his or her foot on top of the ball before him. A “entices” B to come after the ball. 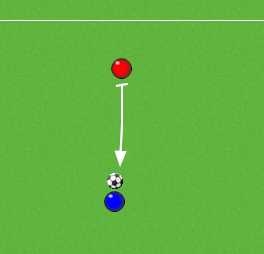 4. A does not move until the defensive player attempts to reach for the ball with his or her foot.

5. At this time, A attempts to dribble around the defensive player and over the finish line.

– offensive: be careful with the ball, but also trick the defender into thinking it’s a ball he or she can take away.
– offensive: try any method they’ve learned to dribble the ball around a defender.
– defensive: do NOT “throw the leg” or reach for a ball unless you’re sure you can gain possession otherwise you’ll lose balance and the offensive player will dribble around you.

Tip #1 – Award offensive players that consistently dribble around the defenders that are guarding them.

Tip #2 – Defenders should be complimented on being patient and not reaching for the ball.

Tip #3 – Encourage offensive players to use any “faking” skills in their arsenal to get around a defender and try new ones as well.