Musical Balls is a drill that’s a favorite among players. They improve their speed by trying to beat other players to the ball. They also practice quick control and placement of a ball into a safe area.

1. This drill uses 5 players per group and 4 soccer balls.

2. Five players line up on the 6-yard line. Four balls are placed in front of the center circle. 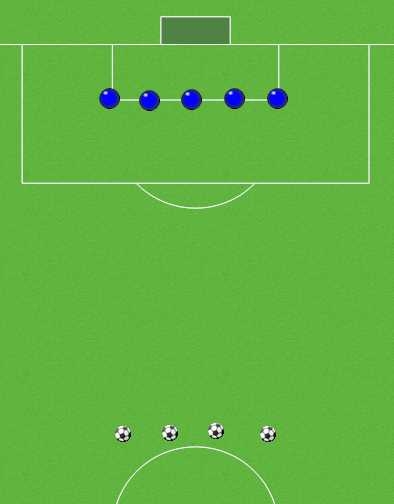 3. On the whistle, players race to control one of the balls.

4. The player that does not win a ball attempts to take a ball away from one of the other players who now are permitted to dribble around the field.

5. Play continues for about one minute or when the coach ends the match. Play is confined to one half of the field.

Musical Balls is a simple ball handling and fitness drill. Players like the simplicity of the game and don’t realize all of the skills they are building. During Musical Balls, instruct players to…

– win a ball and dribble away from pressure as soon as possible.
– avoid wasting energy on chasing (for the player that doesn’t win a ball) and try to contain a dribbler and wait for him/her to make a mistake.
– enjoy the role of being the player without the ball as this is a situation that will show itself in a game.

1. Using a smaller playing area which stresses skill sets more than conditioning.
2. Adding more players but keeping the number of balls the same.
3. Requiring ball handlers to dribble in a pre-defined route once they win a ball.

Tip #2 – Encourage chasers (if using more than one) to team up with
one another in order to take a ball away from another player.

Tip #3 – Dribblers should try to keep their body between the ball and
the player trying to take it from them.

One Response to Musical Balls