During the course of a game, there will be many situations in which players won’t have a lot of space in which to maneuver. Often a pass is received by a player who must then quickly make a decision to shoot or pass to another player. Breathing Room is a great footwork soccer drill that conditions players to become comfortable with quick shooting and ball control in congested areas. Also serving as a defensive drill, it enables defenders to practice containing offensive players and work with teammates in a defensive unit.

2. Using a proper throw-in, a neutral player throws the ball in the vicinity of the offensive players. 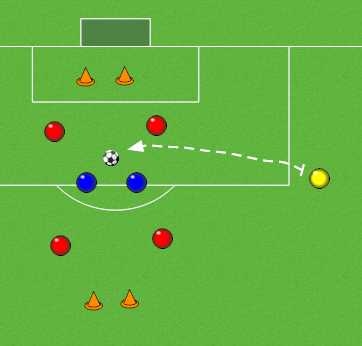 4. The job of the defenders is not to kick the ball away but to simply surround and act as a wall and harass the offenders who are positioning for a shot.

5. In order to score, a ball may only enter the goals from one direction, although there are no boundaries to the playing field. Once a team scores, players then line up behind the goals where they started and await a new drill to begin. 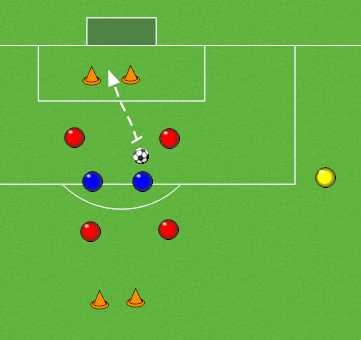 Breathing Room is a simple defensive and finishing drill. Players will have their decision making abilities tested in a short amount of time. During a Breathing Room match, instruct players to…

– (defensive) communicate with each other and don’t bunch up.
– (offensive) do not hesitate to take a shot when you think one is available.
– start to get a feel for the combinations and possibilities of plays that could happen in a short time period. There are only a few scenarios that could take place in this drill so it’s easy to prepare for everything.

Tip #2 – Encourage offensive players who have ball possession to
turn their backs to defenders and use their body as a shield to protect
the ball.

Tip #3 – Communication amongst players is critical and fellow
teammates must do a lot of talking to help a ball carrier under stress.

One Response to Breathing Room