Scoring a goal is one of the hardest and also one of the most exhilarating tasks in soccer. To score a goal usually takes quick reactions when opportunities present themselves. One of the best places on the field where opportunities are 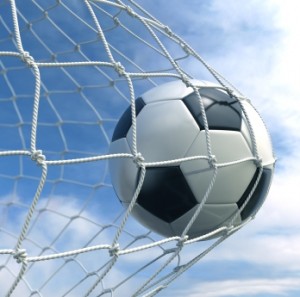 In the six-yard box things happen quickly. The attacking player will want to get to the ball first and as he’s concentrating on its movement he also needs to be aware of the position of defenders and the position of the goal in relation to himself. This is more difficult than it seems and for young players who get very nervous when close to the goal it’s almost impossible. Continual misses from close range can also damage a young player’s confidence.

Awareness near the net stems from the simple ability to see out of the corner of the eyes. Have your players look at an object directly in front of them and then note what else they can see without taking their eyes from the object. It’s almost impossible to notice things at right angles.

Here are some soccer practice drills for developing prowess in front of the goal-mouth.  No matter if the age of your players is kindergarten to U-16, tell your players to…

1) Have the ball coming directly at you rather than at an angle. If you are on your own, find yourself a wall that you can mark targets on. Make various marks about a foot square and number each of them. Stand about fifteen yards away from the wall and hit the ball firmly against it. As it bounces back to you, play it first-time at one of the targets. As you move in on the ball cultivate the habit of ‘seeing’ the target without taking your eye off the ball.

2) Take a friend out to practice with. Play the ball to your partner, he plays it back to you like a wall-pass and you shoot at the target. Remember that you must choose which target you are trying to hit before you start. As the ball rebounds from your shot your friend should control it, play a wall-pass with you, and then shoot at his chosen target. Then you collect the rebound and so on.

3) If you have another friend with you, put him in goal so that you now have a goalkeeper to beat. A practice competition is always a good way to sharpen your skills. Chalk a target about six yards wide and four feet high on the wall. The ball must be played first-time as it rebounds from the wall and it must hit the target.

4) Here’s a game to try with 2 players. Start the competition by striking the ball from about ten yards and hitting the target. As it rebounds, your opponent must hit it back first-time at the target. You gain a point every time he misses the target, and, of course, he gets one every time you miss. The object, then, is not only to hit the target, but to hit it in such a way that it rebounds awkwardly for your opponent. To play this properly you will have to concentrate on the ball and also be aware of the goal and the position of your opponent.

Although these are simple drills, they will build confidence and help your players to keep calm when the real chance occurs in a game. The greatest asset of all is the desire to get the ball into the net. It will require courage, coolness, accuracy, speed of both thought and movement. But if your players continually work on their skills and really want to score goals, they will regularly enjoy the greatest feeling in soccer.