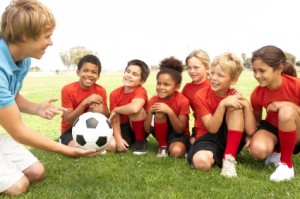 An overlap play can be taught to players of any age and can be one of the first aggressive drills that is introduced to pee wee or kindergarten age players with some success.

One way of trying to break down well organized defenses is to get wide in attack, pulling defenders out of position in order to create and exploit space in the areas near a goal. A good ball player can sometimes do this on his own, drawing his marker and one or more covering defenders towards the flank, but more often it needs that vital extra man in support on the outside to make it work. This type of supporting run is usually called the overlap.

An overlap play can be taught to players of any age and can be one of the first aggressive drills that is introduced to pee wee or kindergarten age players with some success. It’s a great way to introduce the tactical side of soccer to young players. A drill associated with overlapping begins to instill the team concept to players and shows them the need to support their teammates.

The overlap is the safest way for a wing fullback to go forward and join the attack. A fullback, while still responsible for defending, can easily participate in an attacking run. He needs to know when and where to move up in support and must think and play like a forward when he pushes up into the opponents’ half. Also, he should be adept not only at getting in crosses but also confident enough to cut inside and shoot at a goal when the chance arises.

The overlap involves giving support by moving from a position behind the player on the ball to a position well in front of him. Providing there is space, the time to overlap is when the player in possession no longer needs support from behind, and when (in the case of the ball being first played up to him) he has the time to turn and lay the ball forward. If there is no covering player behind the challenging defender, this automatically creates a two-against-one situation and gives the man on the ball options. He can use the teammate on the outside or he can move infield. Much of this will depend on the reaction of the defender. If he moves across to cover the supporting player then the better bet may be to challenge the defense which is now put under a little more pressure by the decision about whether to cover the man making for the break near the line.

It is vital for the supporting player to get well in front of the man on the ball with an overlap. To be effective, the run must take him past the defender as well as the attacker and if there is a specific covering player, then also past a point level with him. The move must seek to turn him as well as draw him across, destroying both his position in terms of his angle and distance from the challenging player and his normal line of retreat. It’s now two-against-two, but the advantage lies with the attackers because they have forced the defense to become unbalanced. In terms of cover, the overlapping player is now an extra man. If he now receives the ball, a third defender is forced to consider pulling away from a central position to cover. The player making the pass should move into a supporting position in order to capitalize on the newly gained advantage, almost certainly helping out the player he has released.

Sound too complicated for young players to grasp? Possibly – but as a coach who knows his players you’ll be able to determine how complicated a play needs to be. Simple drills for younger players, such as preschool or kindergarten age, can be developed that simply stress the importance of making runs, overlapping, and supporting. Plays such as these allow players of every position to feel more involved in the game.

View all posts by Rob Smith →
New Free Report: “30 Ways to Motivate Players and Keep Them Working Hard”
Mark a Tough Opposing Player Right Out of the Game