A through pass is one of the most effective passes in the game. Its effect can often be measured by the position in which it puts the receiver or the number of opponents it plays out of the game. Opponents will be content when the ball is being passed right in front of them. The longer they can keep the ball in this position, the more time other players have to recover into defensive supporting positions. 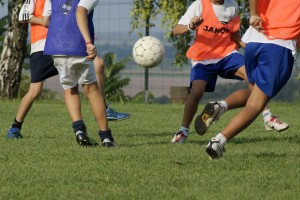 A good through ball can beat most defensive systems, but because of its value in attacking play, it has become one of the most difficult to execute. The space into which to play the ball often must be created by the team as a whole, and the direction of the intended pass has to be disguised until the last moment. Accuracy is obviously important, and the pace and timing of the pass must be such that the ball arrives in the intended space at the same time as the player so that he can shoot in his stride.

Since through balls mean goals they take a lot of practice to get right. For middle school down to pee wee age players, the idea of the through pass is difficult to teach. Most young players want to pass the ball to a teammate directly. A good through pass requires that a pass be placed into open space so the teammate can catch it in stride. This is a difficult and abstract concept for 10 and under children but it can be taught.

Here’s a basic soccer positioning drill to try. Begin by practicing the strength and “weighting” of the pass, working with a couple of teammates in an area about 25 yards long. Two players stand at one end with a ball while the third waits at the other end. The object of the practice is for one of the two to make a run across the area while the other one plays the ball so that it reaches the other end at the same time as the player. He then turns with the ball and plays it across the area for the third member to reach on the other line. This is now a continuous exercise with emphasis on accuracy and timing. The inside of the foot is best used to make the short pass that’s required and this will help accuracy. This exercise will give young players the feel of passing to an open space.

Several factors will have an influence on through balls. Ground conditions will have to be taken into consideration. Wet slippery grounds will make the ball pick up pace as it hits the ground. Heavy, sticky grounds will have to be dealt with by playing firmer balls or passes chipped through. Wind will also dictate how the pass should be weighted. The size of the field will also have to be taken into consideration. On long narrow fields the ball can be played deep into enemy territory while on short wide grounds the diagonal passes are more likely to succeed.

Remember, constant movement up front is essential to create the opportunity for the through pass. Soccer, in general, is a game of movement and the players should always be moving even if they’re not near the ball. Two or three players willing to run forward should push up and work at the back of opponents. From then on the rest depends on accuracy that can only come from practice.