Kick-Off is a great end-of-practice drill when players are tired or can be used at any time to slow down the pace of a workout. It’s an exercise that develops good penalty shooting, visualization, and builds skills kicking a still ball in set pieces. One aspect of the game that players like is that it gives some of the lesser skilled athletes a chance to win.

1. Instruct each player to line up on the 6 yard line, with a ball, facing the goal. Players will be spaced on the line about several feet apart from one another.

2. On your whistle the first player (you can point to the player on which side the drill begins) takes a shot on goal. Each player then takes one shot and shooting takes place in quick procession. As soon as the shot is taken the player runs around the back of the goal to retrieve the ball and then waits on the sideline as the remaining players take their shots. 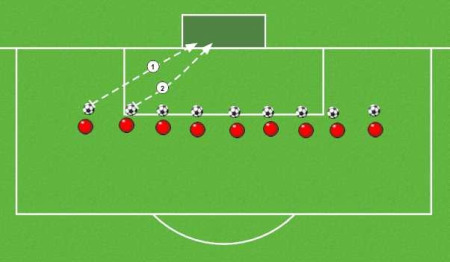 3. After each player takes a shot and all have retrieved their balls they may then line up at the distance of a penalty shot, or about 12 yards out. If a player missed the shot from the 6 yard line then that player is eliminated until the next round and waits off to the side. Once a shot is taken from the 12 yard line, the next round is from the 18 and so on.

4. The object of the game is to be the player who’s made each of the shots and is the last player standing. After a shot, players can run to gather their ball as play is in progress. Sometimes it’s best to wait until all players have taken their shots before retrieving balls so as not to be in the line of fire and risk injury.

5. The process continues until one player remains.

Kick-Off is a game that requires a lot of concentration and proper foot placement on the ball. Players like it because it’s simple and relaxing. During Kick-Off instruct players to…

1. Shortening the time players are allowed to prepare for their shot.
2. Using left or right feet only.
3. Using a goalie for added pressure.
4. Trying a round during which players keep their eyes closed.

Tip #1 – This drill can be used as a break from the more tedious aspects of practice and often provides a welcome break.

Tip #2 – Set up a reward system – For example, if a player wins a match then that player is excused from post practice running.

Tip #3 – Encourage players to try new variations on their shots – sometimes they’ll learn something new that works even better for them.

Tip #4 – Set up a make-believe atmosphere to mimic the pressure of a real game situation and have the players learn to keep their composure.