The journey to becoming a more complete player begins by building confidence and then learning to maintain it after set¬backs. When a player is confident he expects success. Learning something new then becomes a challenge rather than a problem. The older children become, the more they view learning as something that’s not fun. A good coach can make learning new skills an enjoyable event for his or her team. And it all starts with building confidence. 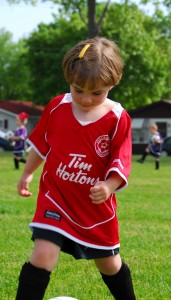 Confidence is a choice. A player must choose to become confident. Once the choice has been made, a player must then take responsibility for his actions. Successful players don’t blame someone or something else, which is a sign of insecurity, but instead take responsibility and see setbacks as part of a learning curve, not a disaster that could damage confidence.

A famous player once said “Sometimes in sport you are a hero, sometimes a bum. Today I am a bum, tomorrow I will be a hero.” With this perspective, the player chose to accept the setback and caused no lasting damage to his confidence. He still considered himself to be a great player. The most important self-talk for a player who misses a chance on goal is the phrase “I’ll get the next one,” immediately.

Players high in confidence are easy to spot. Here are some indicators.

• having a “can do” attitude
• always showing good body lan¬guage
• enjoying competition and having fun
• not worrying about failure or consequences
• being self-dependent, not seeking to blame others
• staying calm and collected, showing good self-control
• talking to themselves and others in an encouraging, positive way
• concentrating well, both in training and in matches
• accepting themselves no matter what

All these characteristics reflect a player’s confidence in his or her ability to cope with the challenge of soccer, which initiates a chain reaction that provides a high level of energy which is the fuel of positive performance.

Pee wee, middle school, and even players in their teens, such as in the 16-and-under suffer from ups and downs in confidence. Be an observant coach and watch your players closely. Sometimes a simple 30 second conversation can be very uplifting to a child that wants to perform well but isn’t reaching his or her own expectations. As a coach, you want players with “controlled” confidence. If they have this style they’ll have more fun, be easier to teach, and ultimately be more successful.