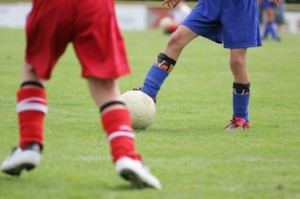 You have just volunteered to coach in your town’s recreation league. You can’t wait for your first day of practice. Your players start showing up and you encourage them to start kicking the ball around. Over to one side, you witness a few players playing with a volleyball instead of a soccer ball. They are stopping the ball with their hands and it is obvious this is their first exposure to the sport of soccer. A short distance away, you see three players juggling and practicing one-on-one moves. It dawns on you that you have team at vastly different skills levels. You start to panic! You think…

“How do I coach a team with this diversity of talent and experience?”

The above scenario is common on youth soccer teams throughout the country. In a competitive club situation, you can have tryouts and place players according to their experience and ability. Even then, often there is a wide discrepancy in skills.

For the youth soccer coach who is faced with these challenges, here are three ideas on how to make their experience enjoyable for all players, regardless of their skills level.

1. Use a Whistle to Indicate When They Should Turn Back – Instead of having the players complete the drill at a certain spot, have them turn around and go back the other way on the coach’s whistle. If the players go to a spot, the less experienced players will always be last and the more talented players will spend a lot of time waiting for them to finish. By turning on the whistle, the better players will cover more of the field and everyone should finish nearly at the same time. Here’s an example of one fundamental drill below:

• Speed Dribble – you instruct the players dribble as fast as they can, while still maintaining control of the ball. Teach them to speed dribble with the outside of their foot, toes pointed in, for better control. They should be take two full strides between touches. They need do a pull-back on the whistle and return where they started. So the better, more experienced players will cover a lot more distance before the whistle is blown, but will have a lot more ground to cover to reach the starting point. The beginners will be slower and not have as far to go to get back. Both are being challenged and will spend the same amount of time developing the skill.

2. Provide Multiple Options to Each Drill – you can demonstrate two dribbling moves a player can attempt in each drill. One would be a basic move and one would be an advanced move. The player can pick the one they feel more comfortable performing. Here’s an example below:

• You demonstrate a toe tap drill with the ball stationary. You give the player the option of doing the same drill but creating movement by toe tapping forward and come back to the starting point on the half-way whistle. You add another level of difficulty by saying to go backwards forward and on the way back. The same fundamental is being taught but by providing multiple levels of difficulty you can challenge each player.
• If you see some advanced players, doing the basic drill, you can encourage them to try the more advanced drill. As the season progresses, you will see many of your beginning players advance to the movement drill, which will be encouraging to them.
• Since each player is doing different things, again they are not noticing if other players are doing better than they are.

3.  Do dribbling moves in the 18 yard box – instead of using lines, you can also have all the players practice various moves on your command, but they have confined to a pre-determined grid, such as the 18 yard box.  That way, the players can go at their own pace, gets lots of touches, and not be concerned with a lesser skilled teammate slowing them down.  In addition, with no set pattern of movement, players need to keep their head and eyes up to avoid crashing into another player.

At its core, soccer is about the hundreds of one-on-one situations that occur each time your team steps on the field. Therefore, it is important to train all your players how to handle themselves in a one-on-one situation. This is also a great opportunity to be able to coach players of varied skills levels on your team. The key is to pair players of equal skill level, so it is a challenge for both players. Here’s an example of a simple drill that when you pair players based on talent will be enjoyable to the players regardless of their skills level, will provide a great conditioning component to your practice, and will develop the skills necessary to compete in a match.

Hit the Cone – after pairing your players with an equally skilled counterpart, have them go to an area of the field where you have placed a cone for each group. The object of the game is simple…knock the cone down with the ball. The first player with the ball starts at least 15 feet from the cone, the second player attempts to defend and take the ball away from the offensive player. If they take the ball, they can immediately turn and attempt to knock the cone down. When it is knocked down, the defender gets the ball, goes 15 feet away from the cone, and becomes the offensive player. Play for three or four minutes and then take a short break and repeat. The better skilled players will be challenged and will improve because they are going head-to-head against an equal, and the beginners will greatly improve their skills, as well. One variation would be to have the two better players play against each other in the box and shoot on the regular goal with a keeper, so the keeper can get work as well. 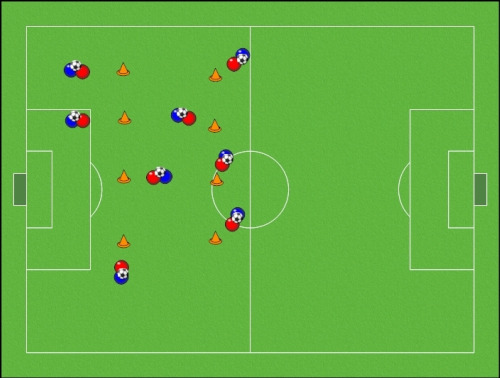 One of the best ways to make the practice fun and enjoyable for all players is to divide your team into small groups of equal talent. After a few practices, you will know who your advanced, intermediate, and beginning players. Based on their skills level, divide your team into two or three groups. Develop games that you can explain the basics to each group with everyone all together, so you are not creating downtime by explaining multiple games to multiple groups.

Choose games you can modify, if need be, to make easier for the beginning players to be successful, but more difficult for the advanced players. Often, you can make a game easier using “rovers” which are players who are always on offense.

Let’s say you have 12 players at your practice, four are advanced and eight are just learning the game. If you mix them all together and play a scrimmage, the four would dominate the beginning players, making it too easy for them and too challenging for the beginning players. Instead, explain one game, but make it small sided. Place the eight beginners in one group and the four advanced in another. Here’s an example:

20 Passes – in this game, you set up cones to make two boxes. You can vary the size based on skill level and number of players. You explain that the first team to complete 20 passes wins. In the advanced group, you just play two-on-two. Each team keeps track of a completed pass and the first team to reach 20 completed passes wins. If the ball goes out of bounds, a throw in puts the ball back in play. The wrinkle in the beginning group is that you don’t play them four-on-four, you play three on three with two rovers. That means that there are five offensive players at all times, thereby making it easier to complete a pass for the less advanced group. You would make their box bigger since they have more players, and the larger size will make it easier to complete a pass.

In order to not have the team feel like they are two separate teams, good players and bad players, mix up your games so that you still create equal teams to compete against each other, but the team is made of an advanced, intermediate, and beginning player. Then, come up with a series of games that they would compete against each other to create game pressure, but because you have picked the teams to be fair, each team will have a chance of winning. Here’s an example below:

First to 50 – after dividing the entire team into equal groups of three, have them get into a triangle, about 15 to 20 feet apart. The object of the game is to see which team can complete 50 one touch passes. They can go in any order and count out loud each time they pass. You can then have them switch to two touch. Run the drill two times each and often you will have multiple groups winning and all the kids will have fun.

Scrimmage Another Team and Split Teams Up Based on Skill Level

Most teams in your area have the same issue of having various skills levels. Turn this into a positive by having a scrimmage, but instead of the two entire teams scrimmaging, split the team up into two groups – advanced and beginners. Have one coach runs a scrimmage on half the field with the advanced players and the other coach runs a scrimmage with the beginning players. The last 20 minutes, you could play on the entire field and scrimmage with both full teams, but a good portion of the scrimmage would be used to pair like-skilled players.

Here are some great additional resources to assist you with running an exciting practice that involves players of all skill levels: