A goal scored from long range is one of the most exciting sights in soccer. A shot that hits the back of the net will bring 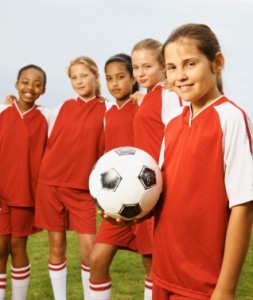 exhilara­tion to both the players and the spectators. Granted, shots like these aren’t usually seen at the pee wee or kindergarten level. In fact, players under 16 and 14 might not make shots like these either. But training young players in the art of long range shooting will help develop confidence in other areas of play. Therefore, taking shots from distance should be given plenty of time in practice.

Power and accuracy in the long shot are both necessary. One is of little value with­out the other. Generally, a player who can hit a ball with power and either score or force the goalkeeper to save nine times out of ten is rare, but the technique can be acquired. You’ll be surprised at the amount of power that can be built up with constant practice, even in very young players.

Start your practice in pairs and have players stand about thirty-five to forty yards apart and drive the ball as hard as they can at one another. The ball can be station­ary because here they are concentrating on power and the basic kicking action which is most impor­tant at this stage.

In theory a kick is divided into its various separate yet combined movements. Tell your players the following:

(a) The position before you kick the ball – Check that your non-kicking foot is about nine inches from and parallel with the ball. Check that you make very firm contact with the full instep or the outside of the instep.

(b) The back swing of the kicking foot.

(c) Contact – Make sure that your knee is over the ball on contact and the follow-throug is smooth.

(d) The follow-through. To help accuracy, watch the ball closely so that the instep makes contact with the middle of the ball and that the foot travels on a line with the target.

Of course every player likes to shoot at real goals, so the next practice to improve power and accuracy starts on the half-way line. Have players play the ball forward about twenty-five yards then move on to the ball and drive it at the goal. They are shooting from thirty yards (or an appropriate distance for the size and age of your players) so power is vital. It will be hard to score, so they should concentrate on being on target. If they miss the target, they should think of why while they are running to retrieve their ball.

The last problem is a psychological one. In a game, under pressure, some long shots will go wildly off-target. But don’t worry – this also happens at the highest level, so whenever the opportunity presents itself, keep firing away at the goal. Young players who have the freedom to take shot from all distances will develop into aggressive shooters. Congratulate players for simply taking chances.

If their shot goes closer to the corner-flag than the goal, remember at least they took the chance and the next one might go in!