1. Five players per drill group are needed as well as 8 soccer balls and one flag. All play for this drill will take place in the penalty area. The distance from player E to the cone is about 5 yards. 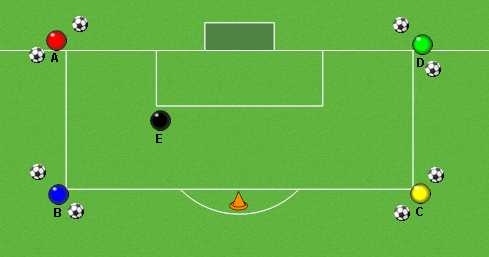 2. On your whistle player A passes to player E. 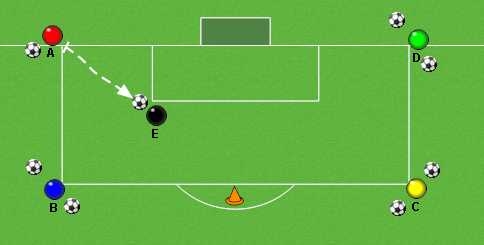 3. Next, E immediately shoots at the goal and runs around the cone. 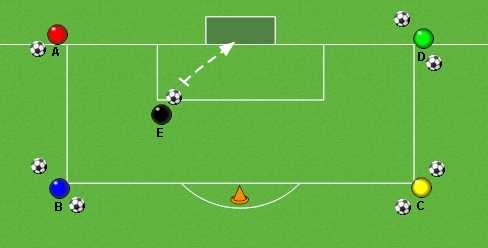 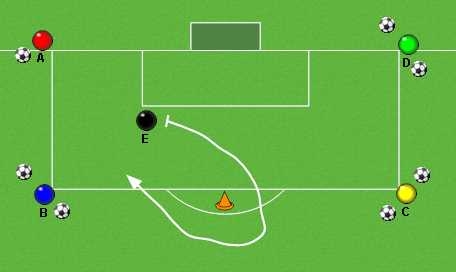 4. Always in continuous motion, E will then receive a pass from player B and so on.

5. Once player E has repeated the cycle 2 times the drill ends.

Pressure Shots is a finishing soccer drill. Players should become comfortable with receiving a pass and taking a shot quickly. A pass should be received, controlled, and shot in split-second time. Instruct players to…

– (passers) concentrate on giving a sharp, on-grass pass to the shooter in a position in which the shooter can best take a shot.
– (passers) keep their head in the drill – Pressure Shots is as much of a drill for the passers as it is the shooters.
– encourage the ball receiving player, E, to occasionally point to where he/she would like the ball to be passed.

Tip #1 – Instruct the shooter to occasionally change running speeds
when receiving the ball and taking shots.

Tip #2 – Reward a player who makes all of his shots and also
reward passers for making passes the receiver can handle.

Tip #3 – Players like competition, so reward a player that scores
the highest number of successful goals.