Shark In The Middle is a fun game that can be played at any time during a practice and can be tailored to be as long or short as needed. It’s geared towards developing concentration and composure under high pressure situations.

1. Instruct players to stand in a large circle on the field. One player is chosen to be the “shark” and stands in the middle of the circle. One ball is to be used and is given to a random player standing in the circle. 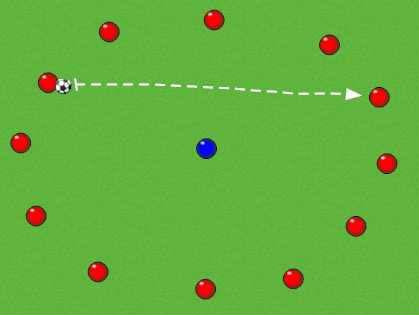 3. The next blow of your whistle signals the beginning of the game. The object of the game is to keep the ball away from the shark who is trying to intercept the passes.

4. Players may pass the ball to anyone along the circle whether it is a teammate right next to them or a teammate farther away. Players try to put together as many passes as possible.

5. This process continues until the shark intercepts the ball. 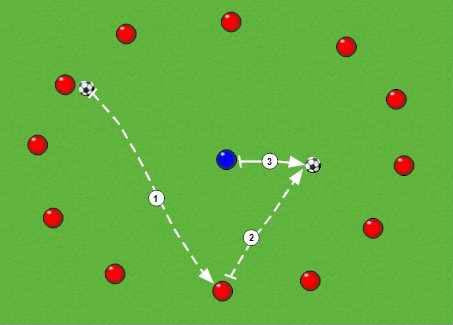 6. When the ball is intercepted the player that caused the ball to be taken away (sometimes the coach’s judgment is needed!) becomes the new shark and the original shark takes a spot along the circle. 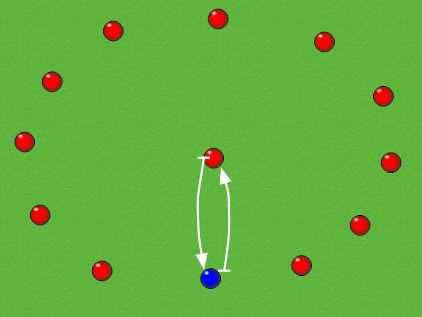 Shark In The Middle is a game that requires quick thinking and a feel for the abilities of the attacking shark. Players like it because it’s as much fun to be along the circle as it is to be the shark. During a Sudden Death match, instruct players to…

– have a plan with what to do with a ball before it comes their way.

– try any foot and passing drills they’ve been taught.

– keep their awareness high and be ready even if they aren’t in the immediate play.

1. A larger playing circle to build the shark’s conditioning.
2. Using left or right feet only.
3. Adding a second shark.
4. Using one-touch passes with no trapping in between.

Tip #1 – This is a great drill to build poise handling a ball while
under pressure from an oncoming attacker.

Tip #2 – Set up a goal or “record” system such as keeping track of
how many passes a team can string together to keep the ball away from an attacker.

Tip #3 – Encourage players to develop confidence with quick,
sharp passes that their teammates can handle easily.

3 Responses to Shark In The Middle (Age Level – All Ages)