Mass Hysteria is a rapid-fire, exciting drill for all players and simulates a high pressure game situation. It’s a fun game that can be used for building stamina, teamwork, and skill sets of all kinds. Players are forced to communicate and think very quickly while executing short passes and controlled sharp shots.

1. Using cones, set up 4 small goals a short distance from one another. Number each set of cones 1-4. Each player on the team is given a number from 1 to 4. A player of each number lines up behind one of the cones. 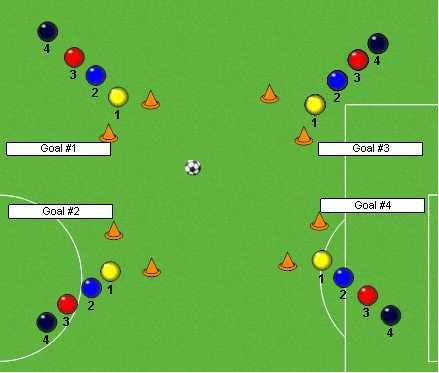 2. Throw the ball into the middle of the playing area and at the same time call out 2 numbers, such as 1 and 3. At this time all players numbered 1 and 3 run onto the field of play. 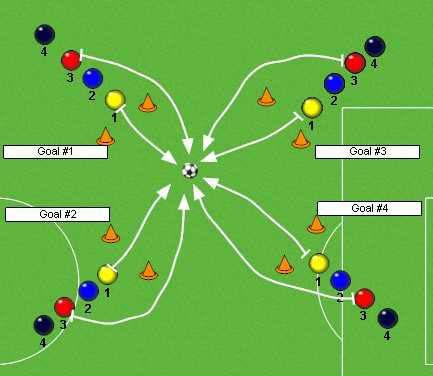 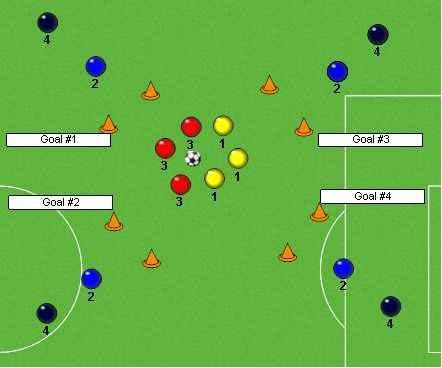 4. Because the cones are close together, only shots that go through on the ground count. Guarding a set of goals as if being a goalie is optional but hands are not to be used.

5. In order to score, a ball may only enter the goals from one direction, although there are no boundaries to the playing field. Once a team scores the players then line up behind the goals where they started and await a set of new numbers to be called.

Mass Hysteria is a simple game in theory but one that can become very confusing for players at the moment their numbers are called. They’ll be forced to assimilate a lot of information in a short time. During a Sudden Death match, instruct players to…

1. Using a larger playing area such as half of the field to strengthen player
conditioning. Using a smaller playing area requires sharper passes.
2. Calling out 3 numbers for added “hysteria”.
3. Calling out 1 number, allow players to organize themselves, then call out a
2nd number a minute later and give team 2 less time to organize.
4. Assigning players new numbers after a given period of time.

Tip #1 – The variations within this game is endless. Players like
the quick action and often forget they’re working hard.

Tip #2 – Set up a reward system – For example, if a team scores the
most points then they are excused from after-practice running.

Tip #3 – In Mass Hysteria communication is critical. This is as much
a game of talking and thinking as it is physical skill.