Wing Recovery teaches players to be aware of defensive responsibilities after they lose the ball. Also a great wing offensive drill, it develops one-on-one attack and defensive skills as well.

2. A passes across to player B.

3. B dribbles down the field and towards the defender.

4. Player B should try to pull the defender towards the middle of the field. 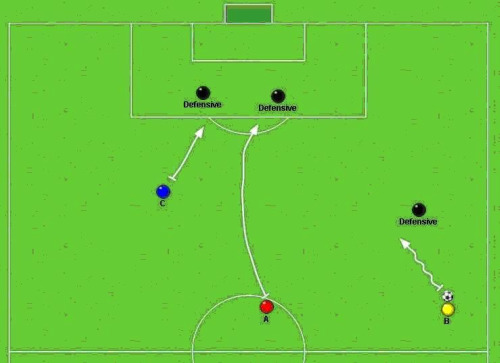 5. Just as B comes near to the defender, B turns and sprints down the sideline. 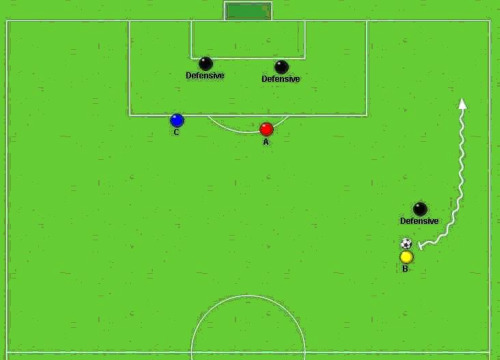 6. If B can beat the defender, the ball is crosses and the attack continues. 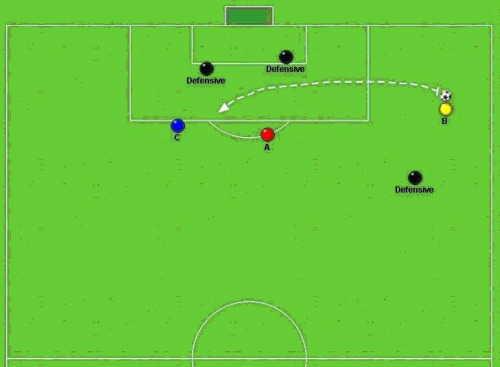 8. Once the offense loses the ball, they don’t try to recover it and simply run to the half-field line as fast as possible.

Wing Recovery is a drill designed to help players develop the mindset recovery if they’ve lost a ball on offense. During this drill, instruct players to…

– Time their runs in order to receive a cross.
– Be prepared to go on defense at all times, even if you’re an offensive player.

1. Adding more defenders or allowing defender to pass to each other to beat offensive players from running back over the half-field line after they’ve lost the ball.
2. Add more offensive players so that a cross from B more likely results in a goal.
.

Tip #1 – Reward offensive groups that score goals as this is a complicated play.

Tip #2 – Everyone, including forwards, are defenders once the ball
is stolen.

Tip #3 – Teamwork is essential and everyone must be in sync.